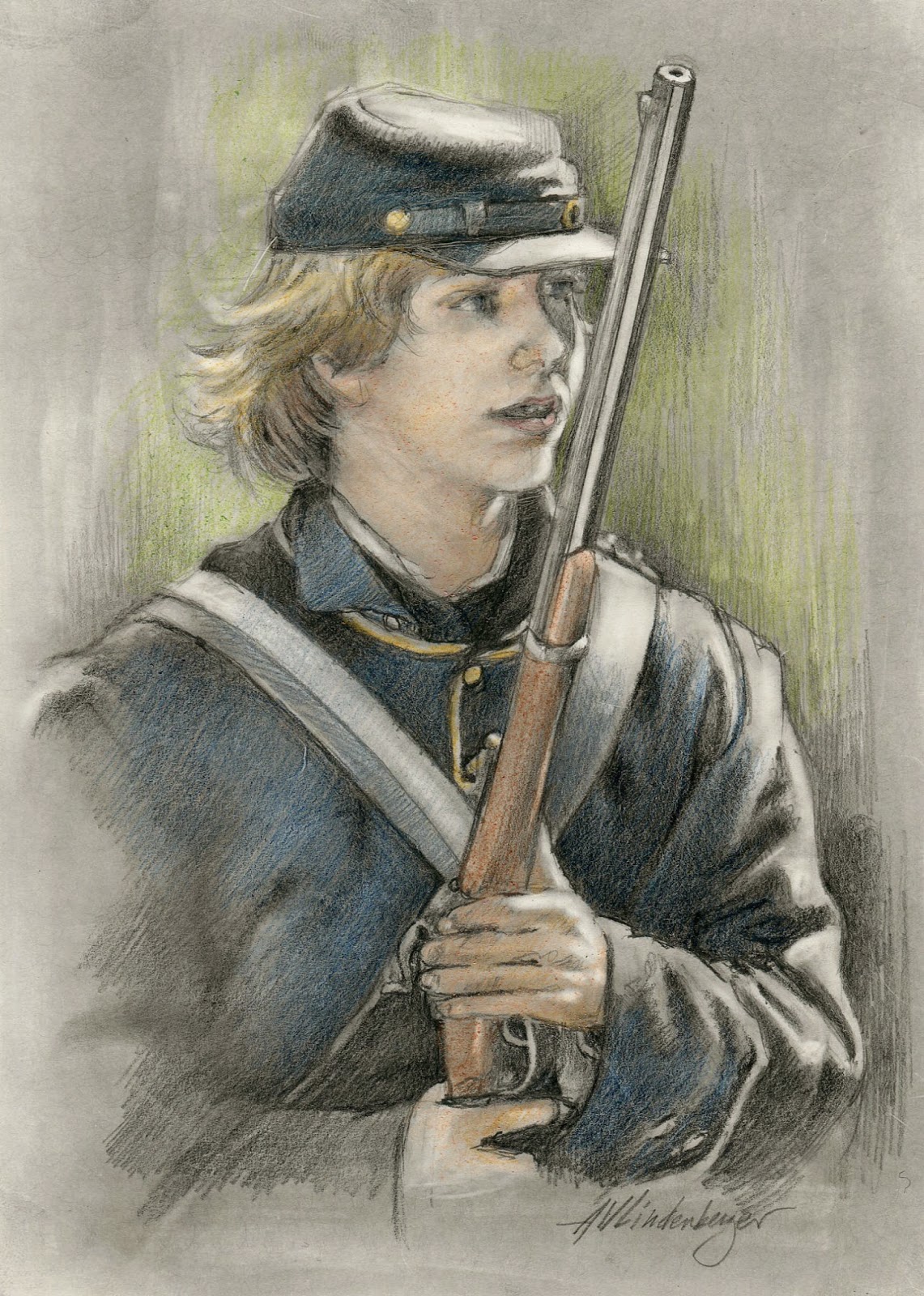 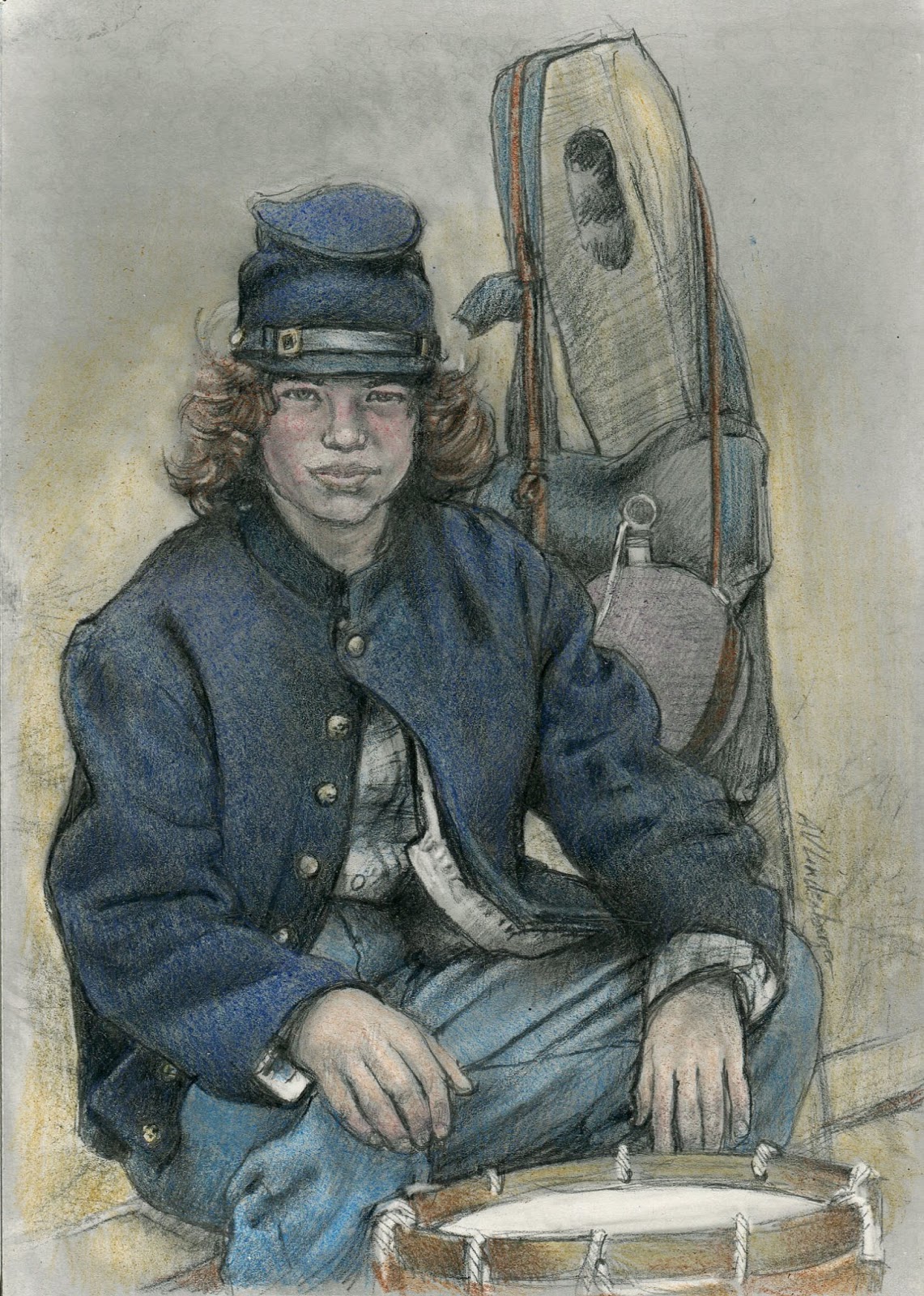 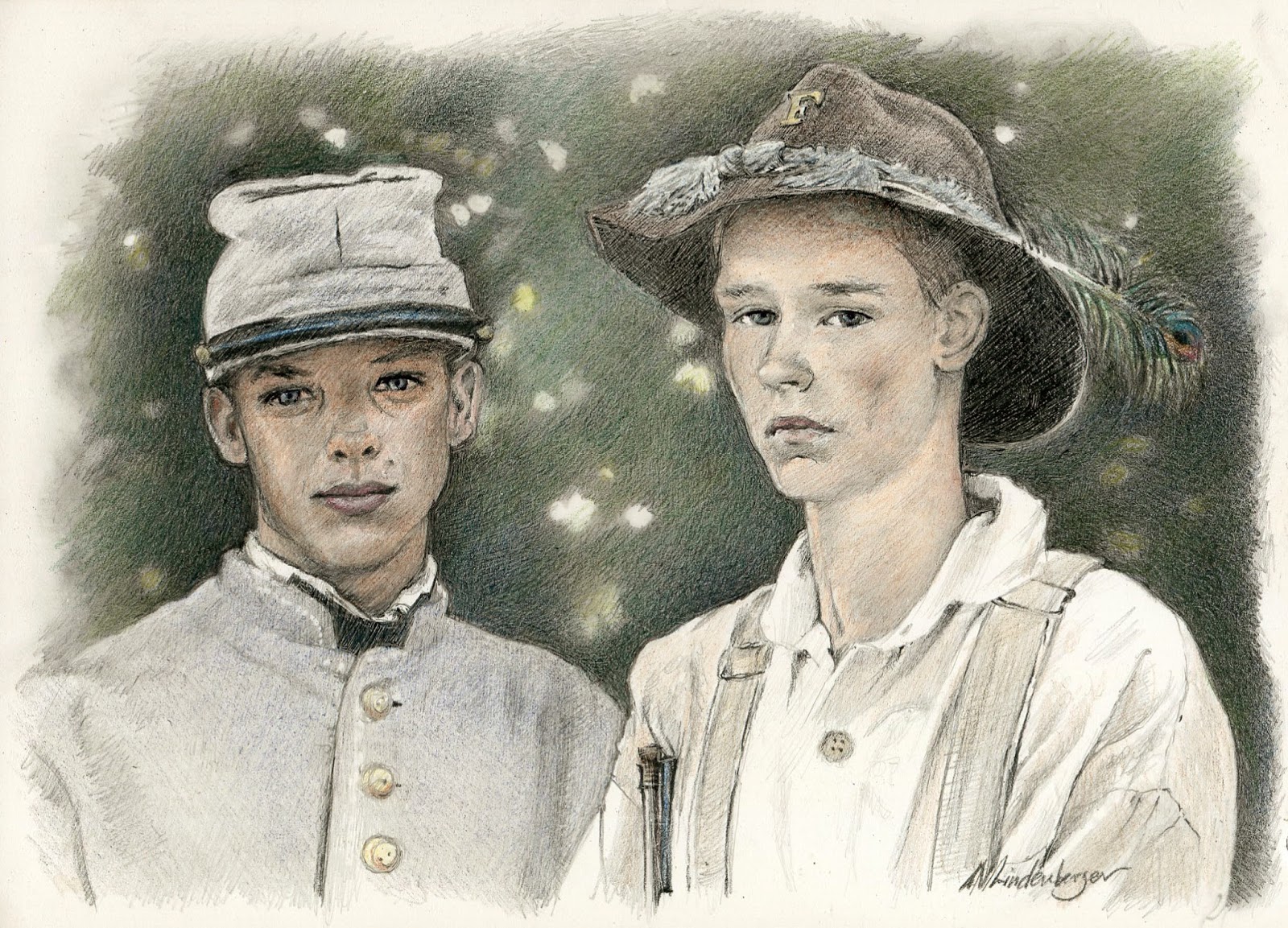 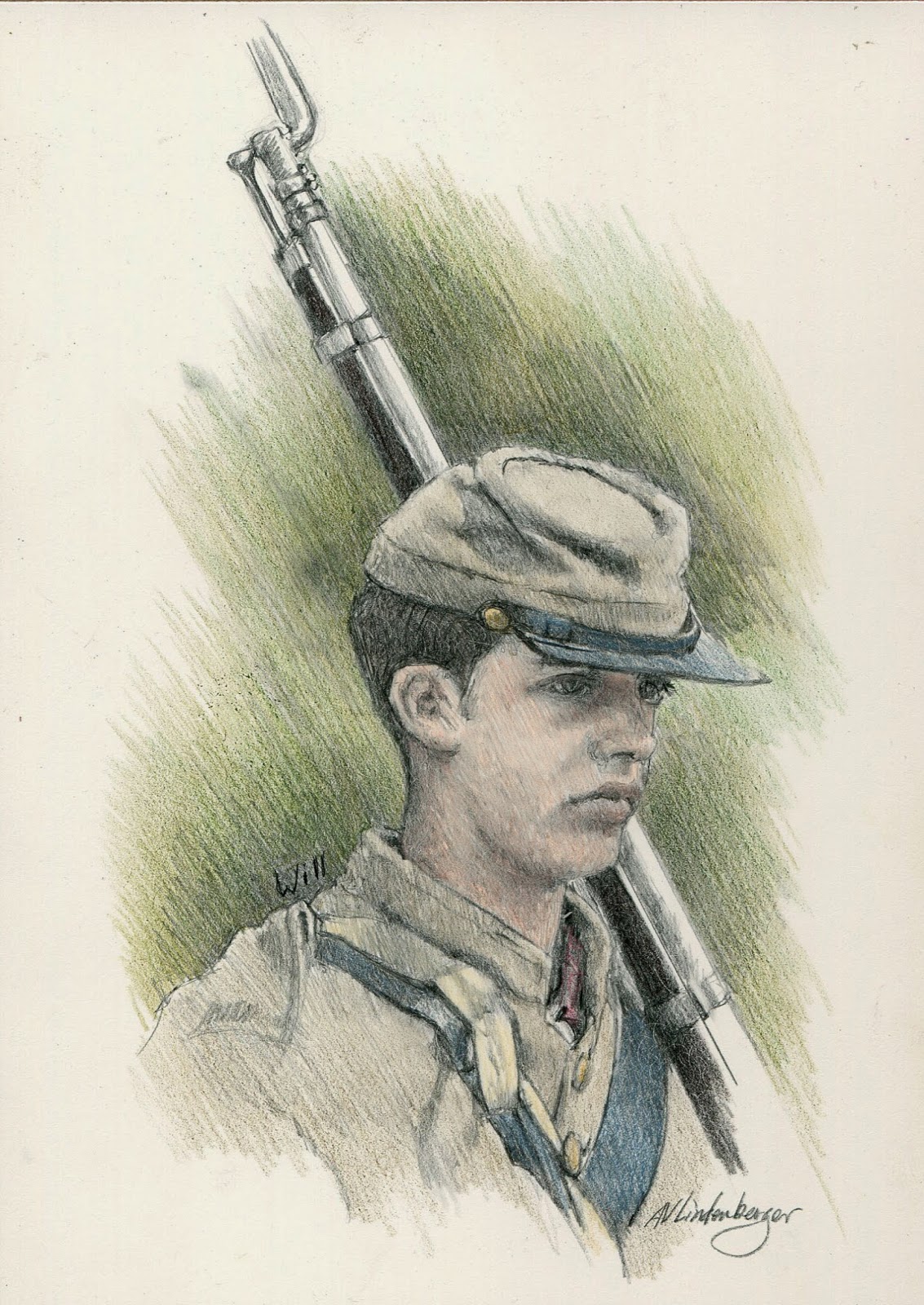 A regular customer of mine from Mechanicsburg, PA, David Gabel, is an avid and skilled photographer who spends a great deal of time capturing "just the right shot" of reenactors at Civil War gatherings. He wanted to give the images more of a period-correct look and asked me to do renderings for him. These are all 5" x 7" graphite and colored pencil drawings on Claybord. The reenactors all gave their permission to use their images but only for David's own personal collection, so these cannot be reproduced for sale but I wanted to share them with you here.
Posted by Amy Lindenberger at 12:05 PM No comments: 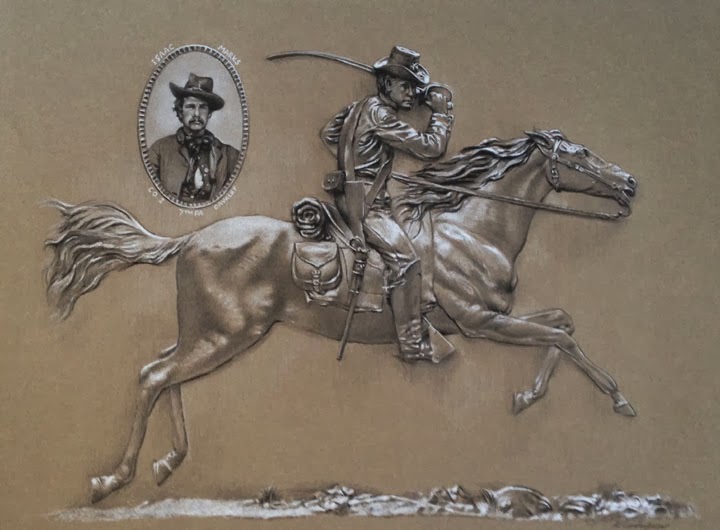 Another interesting commission piece I did in the latter portion of 2013 was this monochrome drawing (French gray dolored pencil on Canson Mi-Teintes paper) featuring a portion of the bronze monument to the 7th PA Cavalry located at Chickamauga National Battlefield in Georgia. This piece was commissioned by Larry Fryer of Woodstock, MD, and also includes an inset portrait of his ancestor, Isaac Marks, who served in Co. I of the 7th PA Cavalry. While I've done numerous commissioned portraits over the years, and even portions of three-dimensional monuments, I'd never tried to capture the raised surface of a bronze relief panel as seen here. I discovered that the key was in precisely rendering the varying depths and crispness of the shadows and highlights. It really gave me a thorough appreciation of the skill level of the original sculptor!﻿

Posted by Amy Lindenberger at 8:37 PM No comments:

My other BIG commission for last year:
In the late summer/early fall I was contacted by a client of mine from California; his son attends Gettysburg College and my client is a frequent donor to the school. He had the idea of creating a diorama which would become a permanent installation in the college library, depicting the college campus in the aftermath of the Battle of Gettysburg, focusing on "Old Dorm" and the surrounding grounds which became -- like so many other places -- a hospital.  My client hired an excellent diorama builder from Maryland, Don Griffin, to do the work.  It was decided that they would close one end of the diorama -- the end behind the recreation of "Old Dorm" -- and needed a backdrop of the sky and surrounding landscape.  In addition, they wanted the reverse side of that panel to contain a montage of significant players in that event, members of the college community, nurses, etc.  My client hired me to produce both of these panels -- "30 x 52" each -- to be completed in time for installation and unveiling to coincide with Dedication day events (week of November 19).
Below is the finished montage panel, along with two close-up views of the diorama itself, prior to the installation with the acrylic cover, and two more photos that show the back and front views (front view also shows my scenic backdrop panel) of the diorama as it now appears, located just inside the main entrance to Musselman Library on the Gettysburg College campus.
While I truly believe Mr. Griffin's diorama is by far the "star" of this installation, I was honored and thrilled to be asked to play a role and have my name on the plaque along with his, as co-creator. 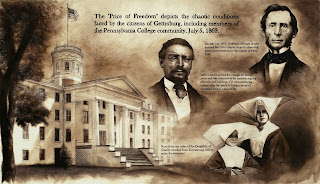 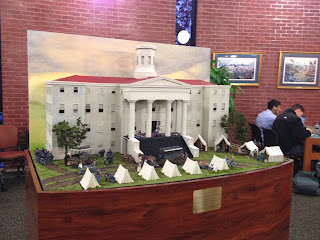 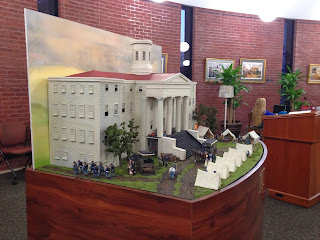 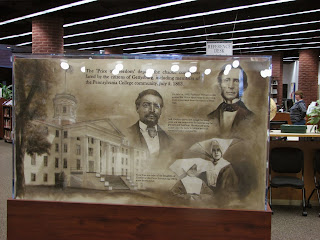 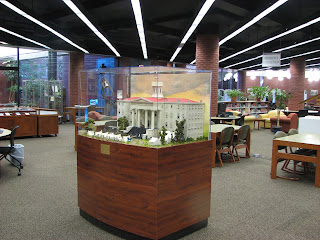 Posted by Amy Lindenberger at 8:20 PM No comments: 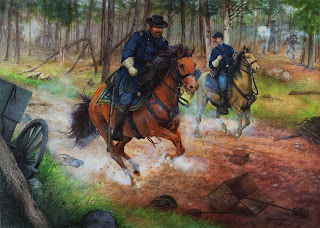 This has really been a year of commissions, for me! Now, for my interests, this is a good thing, of course. But it can also mean that I'm not at liberty to post what I'm working on. Since this particular piece had its unveiling in late September, however, now I'm free to post it. This is a painting -- approximately 20" x 28", commissioned by the James Garfield National Historic Site in Mentor, Ohio. They had always wanted a painting representing General Garfield's service at the Battle of Chickamauga (GA) during the Civil War -- most people think of Garfield as a president but aren't particularly aware that he was a general during that war. This was a challenge for me in many ways, because I don't generally paint battle scenes, per se; I tend to focus more on the "behind the scenes" people and events of the Civil War. Scott Longert, a ranger at the GNHS, did the bulk of the research for me, however, and served as my constant consultant as the development sketches and then the painting itself progressed. It is now on permanent display at their visitor center, and they have two different sizes of prints for sale. I was very pleased to be selected to create this piece for them!

Posted by Amy Lindenberger at 2:32 PM No comments: 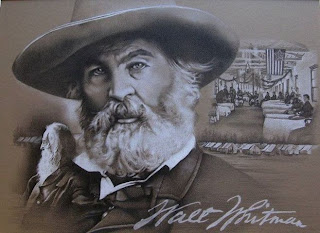 This has been a year of commissions, which is of course a wonderful thing. But it often means I'm not at liberty to post what I'm working on. Since I finally had a chance to get back to one of my own pieces,  I thought I'd take this opportunity to post it. The complete title is Walt Whitman: American Poet and Civil War Nurse. It includes two images of Whitman -- the small one is the last photo taken of him before his death -- and two hospital scenes: a field hospital and the interior of one of the many Civil War hospitals in Washington City, likely visited by Whitman during his time as a nurse. In addition to the original art, 11" x 14" limited edition prints are available for purchase.

Posted by Amy Lindenberger at 9:15 AM No comments:

Much appreciation for a great article!

Many thanks to Karen Hendricks of Hendricks Communications for her fine article about my work on the Handmade in PA blog! Check out this link to the article:
http://www.handmadeinpa.net/2013/06/civil-war-fine-art-beyond-the-battlefield/
Posted by Amy Lindenberger at 12:44 PM No comments:

This past Thursday, June 13,  was the annual One-Day Painting Giveaway at my Gettysburg gallery. I start a small painting at 10 am, work till 5 pm and every guest is invited to enter his or her name in a drawing to win the painting at the end of the day. I advertised that I would be painting an iconic Gettysburg scene in honor of the 150th anniversary, so I chose an 1863 photo of the gatehouse at Evergreen Cemetery to use as the basis for my painting. I was able to include  here a few photographs of the various steps of this painting, rendered with Neocolor II watersoluble wax pastels and Inktense watercolor pencils, as well as the finished product along with the photo used as the basis for this painting. A couple from Canada were the winners of this painting and seemed to be quite pleased! 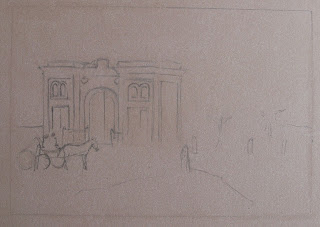 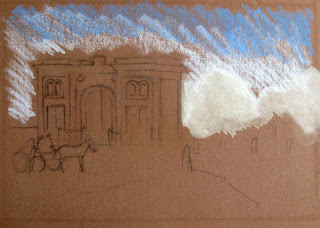 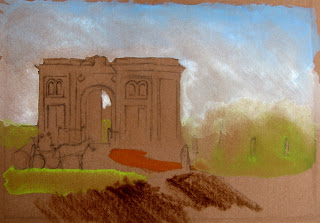 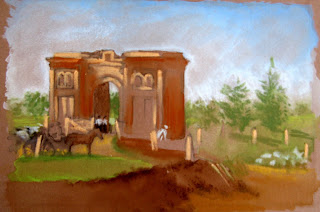 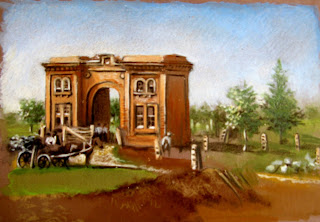 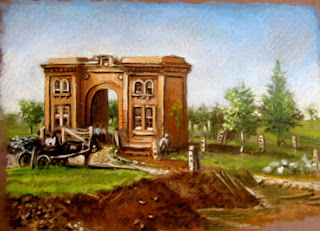 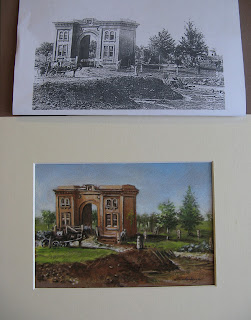 Posted by Amy Lindenberger at 9:58 AM 2 comments:

Labels: Derwent Inktense pencils, Neocolor II watersoluble wax pastels, One-Day painting giveaway event
Older Posts Home
Subscribe to: Posts (Atom)
"Will the America of the future -- will this vast, rich Union ever realize what itself cost back there, after all?" --Walt Whitman 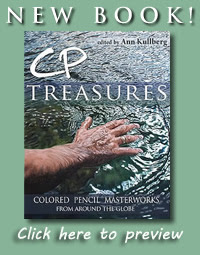 and has also been announced as one of 38 colored pencil works submitted by 23 artists selected for inclusion in Midwest Color, on display
Oct. 5 - Nov.1 in Schaumburg, IL


My artist/neighbor/friend, Wendy Allen -- owner of Lincoln into Art -- very graciously created and posted six YouTube videos featuring segments of her interview with me about my art and working methods.

The following link will open the first video, and subsequent spots can be found on the righthand side of the page:

Please be sure and visit Wendy's gallery website at http://www.lincolnintoart.com/


My work was the subject of a feature article in my hometown newspaper's "Our Civil War" section on Sunday, June 26: www.cantonrep.com/civilwar

What is the "Civil War Chronology Project"?

The commemoration of John Brown's raid on Harpers Ferry, Virginia (now West Virginia), which was held in October of 2009, is widely considered to mark the beginning of the Sesquicentennial -- or 150th -- anniversary of the Civil War era. Over the next five years, many states and local communities will be marking the 150th anniversary of battles and important events that occurred in their areas during that era, and state and local commissions are being established to bring attention to those events.

Since I first began developing my series of images inspired by Civil War-era America and its people, my goal has always been to provide a complement to the images of battle scenes and famous generals focused on by most other Civil War artists. My approach has been to get to know these people in their pre-war identities and culture, and try to move through the War era in a chronological fashion, hoping to gain some sense of what they experienced as the War unfolded and engulfed them. My work can essentially be described as homage to life in the midst of war, but it carries a contemporary sensibility in hopes of encouraging viewers to see parallels between their lives and the lives of Americans gone before us.

The Civil War Chronology Project is the title I have given to the ongoing project I have developed for myself, to chronicle the lesser-known people and events of the Civil War era beginning with the publication of Harriet Beecher Stowe's Uncle Tom's Cabin in 1852 and continuing through the assassination of Abraham Lincoln in April of 1865. I currently have created more than twenty pieces which were inspired by the incidents and people in the years leading up to, and then including, the First Battle of Manassas (also known as First Bull Run). To view the works created prior to 2010, please visit my website, http://www.civilwarfineart.com/, and specifically, my Beyond the Battlefield gallery page. Since helping viewers establish a more personal connection with the people of the Civil War era is a primary goal of mine, I welcome feedback from my audience. Thank you for viewing! ~~Amy V. Lindenberger